Kelsey Grammar gets serious for a cause 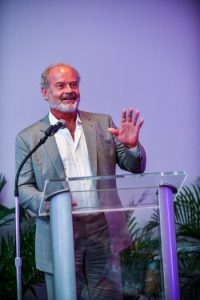 Kelsey Grammer is mostly known for his work as a comic actor. But Thursday night, he moved a crowd of about 300 people at the Grand Cayman Marriott Beach Resort with a tale of sadness.

Mr. Grammer, famous for his role as Frasier Crane in both “Cheers” and “Frasier,” told those attending a fundraiser for the Cayman Islands Crisis Centre stories of his troubled past, including the murders of two family members. His father was shot when Mr. Grammer was 14 and his sister, Karen, was kidnapped, raped and murdered when she was 18.

He told the crowd he had wrestled with what to say after being invited to speak at the event, which kicked off a campaign for a new and larger Crisis Centre. The $1.2 million project will allow the organization to serve more victims of domestic abuse. Mr. Grammer said the Centre was pushing back on some of the horrors in the world.

“This Crisis Centre, it’s all of you, a wonderful group of caring people,” Mr. Grammer told the crowd. “You’re all willing to hold a light up to extraordinary darkness.”

The actor was asked to be part of the event by Crisis Centre honorary board member Ronnie James Hughes, who is a friend of Mr. Grammer’s brother-in-law. The three were together in Los Angeles earlier this year and Mr. Grammer agreed then to help with the upcoming fundraiser.

“If you have some good fortune, as I have, people come and say, ‘Can you help us out?’ and you tend to say, ‘Sure,’” he said during an interview before his speech.

When Mr. Hughes shared his own story with Mr. Grammer of his sister being raped, the actor said, “Suddenly this was more significant to me.”

He said he felt compelled to share his own story as an example of the pain that can impact people’s lives and the hope that it can be overcome.

“Kindness is not as common as we’d like it to be,” he told the crowd, “but once in awhile it can shine a light that could possibly push back the darkness a little bit.”

Jill Nelson, who had come to the event at a friend’s request, said she was impressed by Mr. Grammer’s openness. “Kelsey’s speech was really powerful,” Ms. Nelson said. “For him to share that personal side was really touching.”

Ms. Nelson and the rest of the crowd also enjoyed an evening of wine and food, which included a speech by Olympic swimmer Kate Ziegler and a live auction. A breakfast for three with Mr. Grammer, which the actor donated, went for $9,000.

Ms. Ziegler was one of the top competitors participating in Saturday’s Flowers Sea Swim. Now in its 26th year, the annual mile-long, open-water event draws swimmers locally and from around the world. Sponsored by the Flowers family, the event raises tens of thousands of dollars, which are donated to local charities.

This year’s beneficiary was the Crisis Centre.

“The Flowers family is not only supporting us financially, but they’re also supplying building materials (for the new Centre),” said Ania Milanowska, executive director of the Centre. “Our longtime dream is becoming a reality.”

Ms. Milanowska said domestic violence is a global problem – one in three women are affected – and the Cayman Islands is no exception, although statistics on its prevalence here have never been gathered, she said.

In April, the Royal Cayman Islands Police indicated that more than 1,400 domestic abuse cases involving both adults and children were reported in 2017. That number was more than twice the 676 domestic abuse cases that were referred to the RCIPS Family Support Unit in 2015. RCIPS Inspector Kevin Ashworth, however, said in April that domestic violence cases are still likely to be underreported.

“Over the past three years we’ve seen an increase in clients,” Ms. Milanowska said. “In our opinion it’s because there is more and more awareness and women feel more empowered.”

That increase has spurred the need for a larger facility. Currently, the Centre has just three bedrooms that sometimes house as many as 27 women and children. There is also a common area where the Centre runs youth-targeted programmes. The new facility will have housing for men as well, said Crisis Centre board member Brooke Moore, adding that they too are subject to domestic violence.

Ms. Moore said along with the fundraising push, she is concurrently launching a marketing campaign to raise awareness of the Centre and its programmes. Many Caymanians, she said, are not aware that the resource is available.

“We want people to realize there’s a safe place to come to,” Ms. Moore said. “We’ve done some events where real victims speak out, letting the general public know that this is real and it happens in Cayman.”

One victim who has become an advocate is Paula Stonoga, a chef at Kirk Market. Ms. Stonoga left a 25-year marriage and her Camana Bay home six years ago with her son, who was then 10.

“It’s not easy to start,” she said, referring to escaping an abusive relationship. “I left my home with $10 in my pocket.”

Her husband had taken all of her credit cards and she had to rely on the support of the Crisis Centre.

Today, she said, she feels she has overcome that past. She is even on good terms with her ex-husband.

“You need to be brave,” she said, addressing abused women. “Believe in yourself and trust yourself. And trust the (Crisis Centre) system.”

The Cayman Islands Crisis Centre is a charitable organization that provides support to all victims of domestic violence via various services and programmes focusing on domestic and sexual abuse.